This past week's terrible storm out East provides a reminder of the importance of our ecological infrastructure; in particular, wetlands. The lessons that we did not heed from Hurricane Katrina will perhaps take hold with Hurricane Sandy impacting the nation's commercial heart: in addition to supporting relief efforts now, it is important for us to consider long-term mitigation against the impact of future large storms, which are likely to be more powerful and more frequent than in centuries past. Instead of, or in addition to, relying on massive levies, seawalls, and the like, we need to support public and private endeavors to restore vital natural systems. 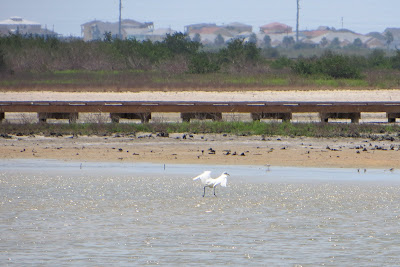 Wetlands are nature's defence against storm surges, and they are her filters for clean water. They provide crucial habitat for life from across the "kingdoms" – distinct varieties of plants, funguses, invertebrates, mollusks, birds, mammals, and so on. And this diversity is beautiful, from a purely aesthetic standpoint. Trails, boardwalks, and observation decks can easily provide human access to appreciate and meditate on the beauty of life, helping reverse the trend of nature deficit disorder.

These natural systems are not just for the coasts; they are also vital to the interior. Yesterday morning, participating in the Trinity Bird Count, I toured the lower chain of wetlands that was constructed along the Trinity River in the past 10 years, just southeast of downtown. Staff from the Army Corps of Engineers explained to us how these wetlands, located near Interstate 45 and Loop 12, would provide additional nitrogen/phosphorus filtration for effluent from a water treatment plant (mitigating our impact on downstream residents). They will help protect the nearby, historically minority, Joppa neighborhood from flooding. Where these wetlands replace or prevent buildup of man-made structures, or improve the ability for the surrounding land to sustain plant life, they absorb carbon dioxide from the atmosphere, and thus provide a means for reducing the city's contribution toward global climate change. In this particular case, these 123 acres of wetlands are joined by over 1,000 acres of the "Great Trinity Forest", providing for substantial carbon sequestration. 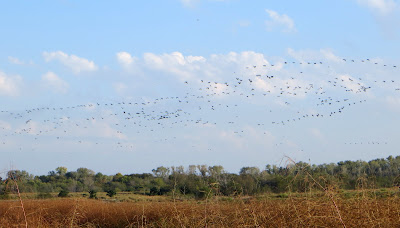 The City of Dallas is working on a recreation plan that will provide access and trails through this greenspace, suitable for hikers, bird-watchers, and even horseback riding (evidence of which can already be found!). Local residents tell of coyote and bobcat, no doubt frequently hunting rabbits like the one I nearly stepped on. That rabbit's cousins are probably happily munching away on a neighbor's vegetable garden; surely the rabbit population is in need of natural checks and balances in the form of predation. Our two-and-a-half hour tour turned up forty-eight species of birds, including nine species of sparrows that migrate from parts north, looking for quality fields like these for over wintering. While everyday Rock Pigeons and House Sparrows are numerous around Dallas, we saw none. But we did see a tremendous flock, estimated at around 1,000 individuals, of Double Crested Cormorants who have come down for the season, feeding in these wetlands and our local lakes. 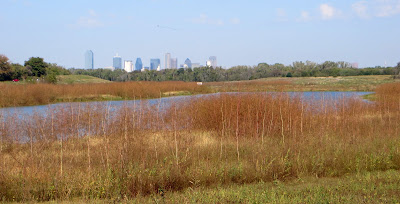 Historically, our coastal areas and rivers like the Trinity contained naturally-formed wetlands. These have been drained for agricultural, commercial, and sometimes health, reasons. But the unintended consequences come back to haunt us with increased flooding, loss of biodiversity, and further artificial separation of "man" from nature. Local organizations dedicated to sustainable living and stewardship, such as the new Dallas Interfaith Power & Light, can play a supportive role in mitigating against the unintended consequences of past policies and economic activity. Reaching out beyond our narrow self interests, we can express the group's mission of "love, justice, and care for creation" by advocating for development projects that restore natural systems and protect local neighborhoods, and in encouraging local citizens to responsibly enjoy them. 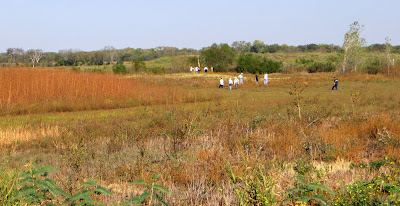 Looking due north, across an old landfill and into the Great Trinity Forest