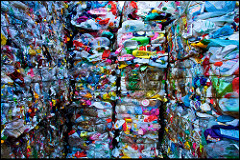 A social media challenge was posed, #PlasticFreeJuly: try to avoid plastic in the month of July. Taken literally, many of us would be unable to read the challenge, without the plastic of our corrective lenses. Perhaps someone, somewhere, still makes glasses from melted, ground, sand. I shudder to think of the weight required to correct my own poor vision this way.

But there is a deeper truth: the gauntlet was delivered through a medium whose human-tangible representation beamed out through melted sand, encased in plastic, with circuits embedded in plastic. Perhaps someone, somewhere, manufactures computers using naught but metals, sand, and rubber insulation. With vacuum tubes.

This is not to excoriate the notion of going 100% plastic-free. Rather, these lessons constrain the month-long experiment to the realm of consumables. Let us come back to the more durable goods when we are ready to overthrow an entire way of life. Which may be necessary sooner than later.

As will be seen in future posts, going plastic-free, in the United States at least, is an exceedingly difficult undertaking. Why bother?

Say: Nature in its essence is the embodiment of My Name, the Maker, the Creator. Its manifestations are diversified by varying causes, and in this diversity there are signs for men of discernment.

Tablets of Bahá'u'lláh Revealed after the Kitab-i-Aqdas, p 142.

For one thing, plastics are killing off life in large swathes of the Pacific ocean. One day this may have a ripple effect directly impinging on human welfare. But for this writer, life is intrinsically meaningful – it is worth preserving for its own sake.

Even were this not the case, it is through studying the great diversity of life that humanity uncovers the hidden realities from which these diversities emerge. Life reveals itself. This is revelation. The quest to understand the universe is one of the great endeavors of humanity. As we destroy life, so too do we lose, perhaps forever, the information encoded in that which is gone. It is as if we were ripping pages blindly from the book of life.

On a personal level, most of the consumable plastic that comes through my household exits in blue bags destined for the city's recycling center. But not all can be treated this way, and unlike glass or aluminum, recycled plastic cannot be used indefinitely. Overall, the vast majority of our plastic still ends up in landfills. The EPA claims that "plastics make up almost 13 percent of the municipal solid waste stream" (though I am troubled by the lack of a citation).

There are all kinds of environmental justice issues related to landfills, which are frequently sited in minority communities. Landfills take up real estate that could be put to better use, and various toxic chemicals can leach out of the plastics [ Polymers 2013, 5].

Plastics as they are produced and delivered to consumers can have deleterious health effects, both on the consumers and any creatures downstream from plastic waste. The famous BPA was just one case in point. Although widely debated, as with climate change, most studies that are not funded by the plastics industry seem to point to significant health impacts from BPA. And researchers are finding more-and-more plastics that can impact personal health through hormone-like behavior.

cf The Scary New Evidence on BPA-Free Plastics… And the Big Tobacco-style campaign to bury it, by Mariah Blake, Mother Jones, March/April 2014. 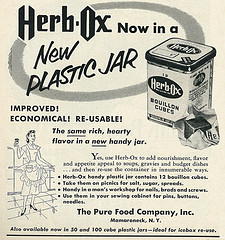 Admittedly, there have been clear rewards from the use of plastic: they are cheap (thanks to an inadequate system of taxation on natural resources); they are lightweight (lowering transportation emissions compared to glass); they are effective at containing and protecting all manner of products (plastic bottles don't shatter when you drop them).

But the risks, and real harms, are also clear once we begin to investigate them seriously. They are harming life in general, irrespective of human utility; life in specific utility to human beings; and life in the ultimate subjectivity of the self.

Even as the controversies remain, if there are good alternatives, why not pursue them?

Coming next: a case study in allergy relief.

After writing this, I was looking at some of the #PlasticFreeJuly tweets and realized that, for many of these tweeters, the scope is actually quite narrow (but nevertheless useful): eliminate single-use plastics during the month of July. But I reacted to the one tweet that had come through my feed, which only had the challenge "eliminate plastic." Even single-use is challenging: this morning I threw away a small plastic inner cap from a milk carton.

How Much Plastic Is Marooned at Sea?, by Emma Bryce, Feburary 2015, Audubon Magazine.

What Happens to All That Plastic?, by Renee Cho, January 31, 2012, State of the Planet blog from Columbia University.